San Jose, Calif. – Who says 13 isn’t lucky? Congratulations to hole in one winner Park Brees of San Jose who won a $50,000 car this May, courtesy of the Del Grande Dealer Group, and paid for by Hole In One International. 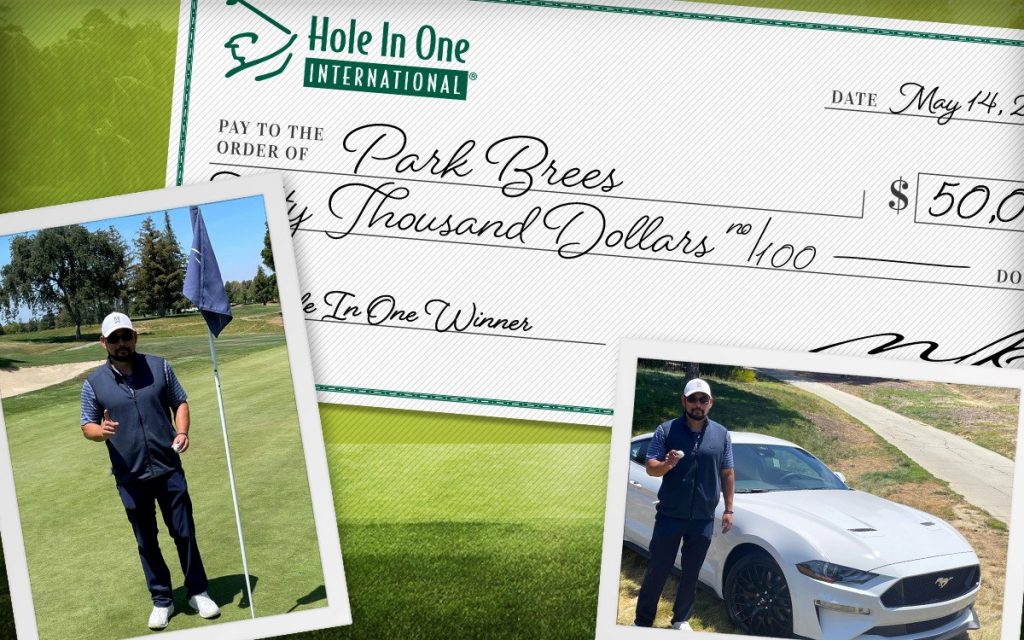 Brees won his amazing new ride after he successfully aced the 160-yard 13th hole with a 6-iron at the Almaden Golf and Country Club during the club’s annual Member-Member Golf Tournament. This was Brees’ first hole in one.

According to his playing partners, it was a great shot; and now Brees has a new ride to show for it.

Are you interested in adding some big excitement to your next golf event? Want to showcase your business during you next member-member golf tournament, or maybe a hole in one winner of your own? Email or give Hole In One International a call today at 800-827-2249 or swing by our website for a quick quote.

Marshfield, Wis. – Congratulations to Lucas Hart who won $10,000, paid for by Hole In One International, in a combination putting contest sponsored by Lang Furniture and Don Blanchard. 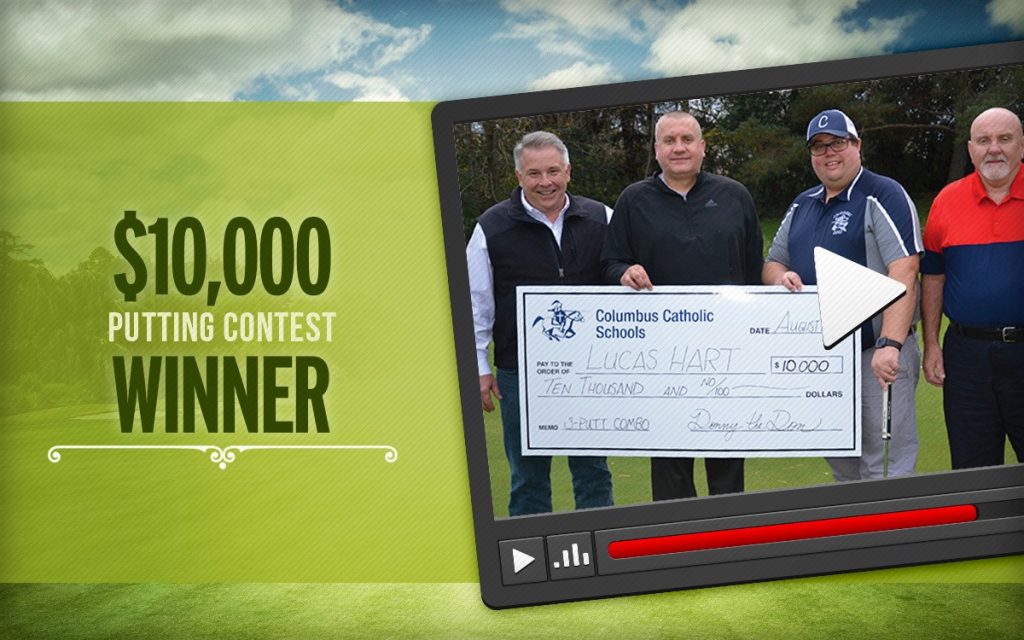 Hart won the big cash prize after he successfully holed a 10-foot, a 30-foot and an impressive 50-foot putt on the practice putting green at the Marshfield Country Club, during the 5th Annual Columbus Classic Golf Tournament’s combination putting contest.

Interested in making your tournament even more rewarding? Looking for an additional sponsorship sales opportunity? Want to give everyone a shot at scoring a big prize before, during or after your event? Hole In One International makes it easy to add a single or combination putt to your tournament.

For more information, give us a call today at 800-827-2249, or swing by our website and get an instant combination putting contest quote.

Johnson City, Tenn. – Congratulations to fundraising hole in one winner Charlie Lowe of Johnson City, who won $10,000, courtesy of hole in one contest sponsor, Watauga Insurance, and paid for by Hole In One International. 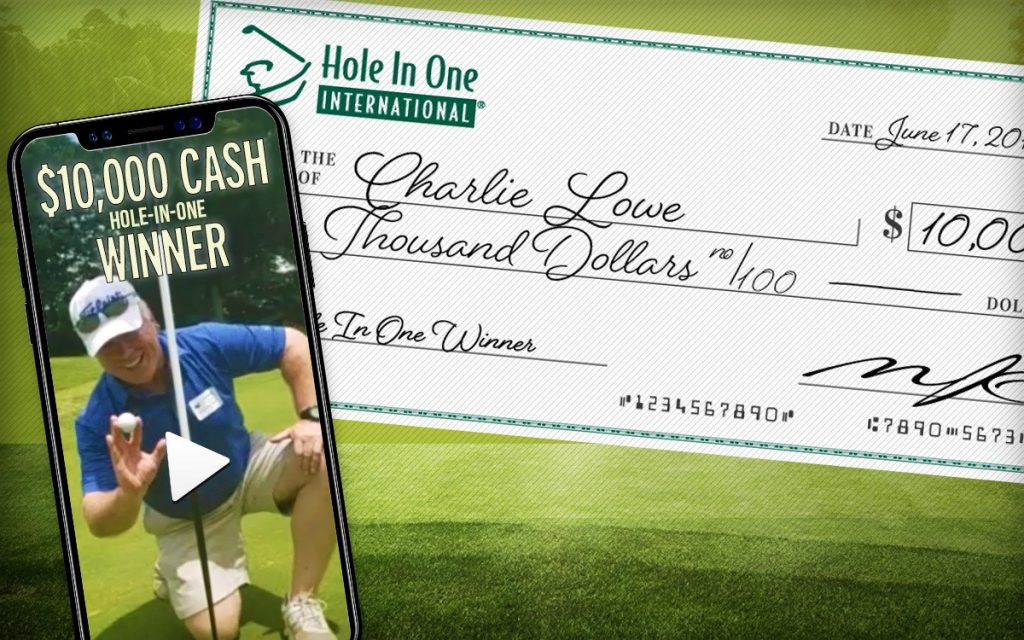 Check out the press on Charlie’s ace!

Lowe won the cash prize after he aced the 175-yard, Hole 3 at the Blackthorn Club at the Ridges during the 21st Annual Doe River Gorge Golf Challenge. Funds raised at the tournament support the Doe River Gorge Ministries, a Christian youth camp that attracts kids from around the country.

It was Lowe’s second hole in one and a first for the Doe River event. Adding to the excitement surrounding the event, Lowe’s big win, as well as the contest sponsor, were featured on the evening news.

Is your organization ready to get back in the fundraising game? Wanting the opportunity to have a fundraising hole in one winner of your own? With a season of socially distanced golf under their belts, tournament directors and hole in one contest sponsors across the country have been experiencing tremendous “pent up” success this Spring. To get your instant hole in one coverage quote, swing by our website or give us a call today at 800-827-2249.

Indianapolis, Ind. – Congratulations to Brandon Lewis of Indianapolis who won $5,000 last Fall in a single putt putting contest insured by Hole In One International.

Lewis made the impressive 50-foot putt on the practice putting green at Broadmoor Country Club following Noble of Indiana’s fundraising golf tournament. Lewis qualified to take the putt after a winning a pair of “closest to the hole” contests.

Check out Lewis’ response when he realizes he nailed the big prize putt.​

A single putt putting contest is a fun and easy way to add excitement – and generate additional revenue – during any fundraising tournament. You can capture additional donations by giving players the option to participate in the putting contest, or you can use a putting contest to create an additional sponsorship opportunity for a local business. Even better, you can do both.
Interested in getting a complimentary quote on your event or learning more about Hole In One International’s affordable single putt and three-putt combination putting contests? Email or give us a call today at 800-827-2249.

Mount Pleasant, Penn. – Congratulations to hole in one winner Cole Beasley of Pittsburg who recently won a two-year lease on a 2020 Ford Escape, courtesy of John Meegan Ford, and paid for by Hole In One International.

Beasley won his two-year free ride during the 24th Annual Rotary Club of Connellsville Golf Outing when he aced the 180-yard, 12th hole with a 6-iron at the Pleasant Valley Golf Course in early October. It was Beasley’s first hole in one.

According to the Rotarian Tournament Organizer, this year’s tournament saw the largest turnout they have ever had; a total of 31 foursomes participated in the event, which is a scholarship fundraiser for the Connellsville Area School District. The Rotary Club’s scholarship golf outings have raised over $300,000.

Are you interested in generating increased attendance and raising more money at your golf outings in 2021? Want to showcase your business while proving an added incentive for golfers to help support a great cause? Looking to possibly have a hole in one winner of your own? Now is a great time to get a head start on planning your event. Email or give Hole In One International a call today at 800-827-2249.