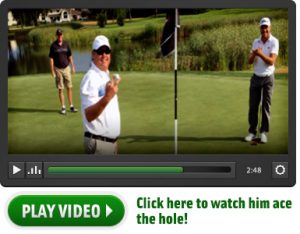 Sioux Falls, S.D. – Congratulations are in order for hole in one contest winners Mike Ness and Jeremy Cauwels of Sioux Falls, who each made a hole-in-one during the First Dakota National Bank’s 2017 Pro-Am Jam winning a combined total of $110,000 in cash, paid for by Hole In One International.

Cauwels, who won $10K for making his second hole in one, aced the 150-yard, 17 hole with a seven iron on the first day of the tournament, which took place at the Country Club of Sioux Falls. While Ness, who is not only made his very first hole in one on the 135-yard Hole 12 with a 9-iron took home the staggering $100,000 prize.

And even more surprising than the fact the tournament had two hole-in-one winners is that Ness is also the President of First Dakota National Bank, the event’s title sponsor. Watch his reaction.

To learn more about insuring your own hole in one contest and making your event even more rewarding for your players, email or give us a call today at 800-827-2249, or click to get a free quote and get started planning your event.

Categories: Hole In One