Norby won the prize after he holed an impressive 50-foot putt during a fundraising putting contest which took place on 9th hole at the Kings Walk Golf Course, immediately following the tournament.

To participate in the fu 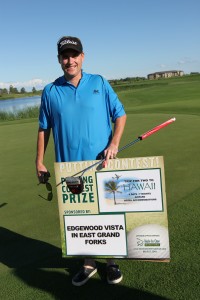 ndraiser, golfers made a donation and took a qualifying shot on the practice green. Those who successfully made the initial 25-foot qualifying putt took their best shot at a 50-foot putt. After getting closest to the hole in those semi-finals, Norby got the chance to take another 50-footer on the 9th hole, this time nailing the shot, winning the Hawaii vacation for two.

But winning the tropical trip wasn’t the only surprise of the day. Turns out Norby had bet that if made the putt, he’d take a little swim.  Check out the prize winning putt – and Norby’s celebration dip.

According to Hollie Britten, Corporate Sales and Marketing Manager with Edgewood Management Group, the morning-to-evening “Longest Day” event, recognizes those who live with Alzheimer’s disease and their caregivers.

“Working with Hole In One International was very easy – very smooth. But of course the best part was getting to walk across the street to Matt’s office and hand him that vacation voucher. That was fantastic,” continued Britten.

We thought that was pretty fantastic too! Looking for an affordable way to support a great cause in your community? Check out more ideas or give Hole In One International a call today at 800-827-2249.

Edgewood Management Group owns and/or operates 53 independent living, assisted living and memory care communities in seven states. The organization raised an impressive $27,000 during their Longest Day events with all proceeds going to the Alzheimer’s Association.