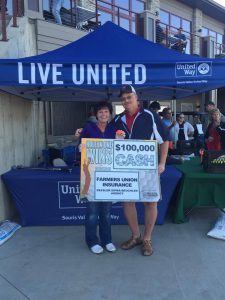 Minot, N.D. – While it wasn’t her first hole in one, the ace Rita Bates made during the Souris Valley United Way golf shoot-out contest at the Minot Country Club is probably her favorite. After all, it’s not every day you win $100,000, courtesy of Farmers Union Insurance – ResslerSipma-Beuchler Agency, and paid for by Odds On Promotions’ sister company, Hole In One International.

The shoot-out was a kickoff event for the Souris Valley United Way’s 2016 Campaign. It began with three days of qualifying rounds where anyone could go to the Country Club and purchase five balls for $10, and qualify to take a shot at winning $100,000, or win a variety of consolation prizes including Callaway Irons, a $250 gift card, and more. Everyone who landed a ball in the targeted area was then invited back to a second-round qualifier, where the field was narrowed to 25. Bates, who was one of 25 lucky finalists, was the only one to hit the green, acing the 140-yard target hole, and winning the $100,000 prize. 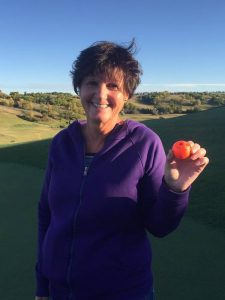 Even better, Ressler was able to take what would have been a $500 donation and turned it into a $3,500 fundraiser for the United Way.

Want the chance to be our next golf shoot-out contest winner? Want to up the ante and give away the chance to win a million dollars in the event of a hole in one? Give us a call at 800-827-2249.

Insuring a golf contest at your upcoming golf outing that requires you to narrow down your players in some fashion?  Whether it’s a Million Dollar Shootout, chipping contest or other insured contest, here are a few ideas from Hole In One International on how to pre-qualify your player(s) to determine who gets to participate in your golf contests, as well as how to increase fundraising dollars, come the day of your golf tournament!

1.) The Raffle
A raffle is the most common way to pre-select participants for your golf contests.  Players simply pay a fee, determined by the golf tournament committee ahead of time, to have their name entered into a drawing should they want the opportunity to participate in a golf contest.  Place the name of everyone who pays up into a hat, box, bucket, barrel, you name it!  Then, simply draw a name at random to see who the lucky qualifier/golf contest participant will be!  Want to collect valuable marketing information?  When creating your raffle tickets, have a space for each player’s information — email, phone number, address, etc.

2.) Purchasing Mulligans
A mulligan is an automatic “do-over” on a shot, meaning the player can play it again if it was a particularly bad shot.  Charge your players $x per mulligan during your golf outing — just make sure they’re aware that they cannot use any on the designated target hole, if a hole-in-one contest is being insured.  Whoever ends up purchasing the most mulligans will come back at the end of the outing for a chance to participate in your golf contests!  It’s that simple!

3.) Auction
Holding an auction as part of your golf outing?  Whether it’s a live charity auction or silent auction, people are always trying to gain the upper-hand… especially when it’s revolving around the game of golf!  There’s a good chance that the bids during an auction will go very high, generating some great fundraising bucks!  Have the highest bidder come back at the end of the auction to participate in your golf contest for the chance to win big!

Are the gears turning yet?  Can you think of any other great ways to qualify players and fundraise when it comes to insuring golf contests?  Feel free to share them with us!  Or, if you have any questions, feel free to contact us at 800-827-2249 or email us! 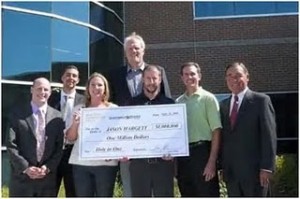 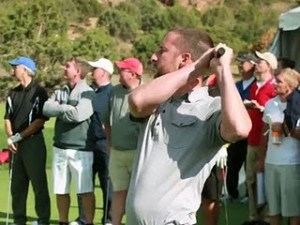 Not only was Hargett’s million-dollar shot covered by every TV station in Salt Lake City, but his amazing hole in one was featured on The Golf Channel, The Early Show, The Ellen Show, Sky News Australia, USA Today, the Boston Herald, the Atlanta Journal-Constitution, The Sun UK and of course, ESPN where he landed at #1 on the Top Ten plays of the Day! And that’s not all. Talk about your viral videos, in just a few short weeks, his prize-winning shot has been seen by over a million viewers on YouTube – and counting.

Now, in case you’ve missed the buzz surrounding this headline-making hole in one, Hargett won the million-dollar prize in a post-tournament shoot-out sponsored by the Villas at Poipu Kai during the Mark Eaton Celebrity Golf Classic at Red Ledges.

While we can tell you all about how Hargett was a somewhat reluctant last-minute replacement with a sore wrist, or about the fact that he was using a borrowed club – or even how he fell down as he charged the hole after the shot, we know you’d rather see it.

So here you go…

Hole In One International » Winners » Shootouts